Card Tearing as a Feat of Strength made the cover of the December, 1906 issue of Bernarr MacFadden’s Physical Magazine. We’ll probably reproduce the accompanying article at some point. In the meantime, if you would like to learn the finer points on the traditional feat of strength of ripping a deck of cards in half, our good friend and Grandmaster Strongman Dennis Rogers has a step by step course which comes as a bonus with issue #6 of the John Wood Report.

A look at the Roubaix Athletic club in Northern France, circa 1906. This club had an excellent assortment of globe dumbbells and an equally excellent assortment of strongman posters on the walls — look closely, you’ll find The Rasso Trio, Apollon, Sampson and Cyclops, John Grunn Marx and Batta. A number of famous “names” trained there, including Jules Parent, Athleta, Noel Le Gaulois, Pierre Bonnes, Batta, Charles Poire, Felix Bernard and Constant le Bouche.

The Oldtime strength athletes figured out a long time ago that sometimes lifting unbalanced, awkward objects build a very different type of strength than traditional barbells and dumbbells. This Italian wrestler was lifting sandbags back in 1906 and doesn’t look like a fellow that you would want to mess with.

A look at the Dammarie-les-Lys Weightlifting Club and their awesome training equipment, circa 1906. (Dammarie-les-Lys is a suburb of Paris) Note the chest expander, and ring weights and, of course, an excellent selection of globe barbells and dumbbells. The president of the club, M. Gustave Dechelpretre, sits front row center holding the sign.

How many men in the history of the World can say they ever put over 370 Pounds overhead with one arm? I don’t know for sure, but the answer is undoubtedly “not many.” In fact, I know of only one: Arthur Saxon, “The Iron Master” …the man whose records will never be equaled or surpassed…

If you’re into training, I’m sure you have always wonders how such a man as Arthur Saxon became so strong… but what if you had a time machine and could go back and talk to the man himself You could ask him exactly how he trained… what he ate… his views on strength… his favorite exercises… what his routine looked like… and what it felt like to lift 350+ pounds overhead with one hand.

Though time travel isn’t currently an option, you can still find out all that and more directly from Arthur Saxon through his two excellent training books: The Development of Physical Power and The Textbook of Weight-Lifting — and they are every bit as useful today as they were the day they were written, well over a century ago! These two classic courses, penned by one of the strongest men in recorded history, are now available once again in high quality modern reprint format:

The meaning of the book’s title… What Saxon looks for beyond the muscles… How his early days contributed to his great strength later in life… Saxon’s international matches and challenges against other strongmen… His ideas on real strength… His views on light exercise… Weight-lifting for other sports, wrestling, boxing etc… Weight in relation to lifting… Notes on muscular measurements… How the strength of a man is often indicated by the thickness of his wrists…

What it feels like to lift 350 lbs. with one hand… The only thought that should be in your head when going for a record lift… Notes on the performance the bent-press… How to perform the One-Hand Snatch… The Single-Handed Dumb-bell Swing… Two-Dumb-bell lifting… Notes on Ring and ball (kettlebell) lifting… Measurements and record lifts… Measurements of Hermann and Kurt Saxon… Saxon’s open challenge to the world!

An eye witness account by famous physical culture authority Thomas Inch, which substantiates Saxon’s claims, rounds out the book. The photos on the front and back cover plus 45 rare photos and illustrations contained therein are more than worth the price of this beautiful 5-inch x 7-inch trade paperback with 122 pages. This is a unique look into the training and philosophy of one of the strongest men who ever lived whose methods you can incorporate into your own training.

The Textbook of Weight-Lifting
The Textbook of Weight-Lifting was written a few years later as part of a series of “Textbooks” on various sports and athletic events and offers an even deeper look into Arthur Saxon’s training techniques.  Saxon’s second training course is filled with many rare and never-before-published photos of the Iron Master in action – he personally posed for each photograph. Here’s a look at the topics covered:

Why everyone should lift weights… The test of strength… “Skill” in relation to weight-lifting… Real strength vs. possibilities… Choice of exercises… The difference between Continental and “Clean” lifting… The best exercises for competition lifting… One and two-handed Bar-Bell Lifts… The first thing you should do when training the Clean… The Clean Press from the shoulder… How to “Lock” the shoulder… Tips and techniques on the one-handed jerk from the shoulder…

The Textbook of Weight-Lifting was originally published in 1910… The modern reprint edition is 5-inches x 7-inches in size and 85 pages in length.  There are also 30 rare photographs of Arthur Saxon in action demonstrating the lifts and techniques discussed in the text. “Textbook” makes a worthy sequel to Saxon’s first book and an excellent addition to your training library.

A Blast from the Past… and a Look Toward the Future

Despite having been written over a century ago, Saxon’s writing’s are amazingly relevant to today’s lifters. His descriptions and tips on the oldtime lifts etc are, of course, top notch, but it is his advice on the other factors of lifting success are the real value to these courses. Saxon weighs in on such topics as proper diet, how often to train, “specificity,” the value of lifting for athletes, balanced development, the proper application of lifting and conditioning work for true athletic development, and mental training techniques… all concepts which were amazingly ahead of their time.

We are also talking about a man who routinely lifted more weight with one arm than most lifters — oldtime or modern — could lift with two, and this is a unique opportunity to learn the details of his exact approach. Saxon’s routines are not complicated and his advice is extremely practical which are two lessons that should not be lost on modern trainees. If you are looking to build your strength and power, you certainly can’t go wrong studying the methods and insight of one of the strongest men who ever lived.

A look at Dimitrios Tofalos lifting an excellent globe barbell… this is thought to be taken sometime in 1906 when Tofalos was training for what would later become known as the ‘Intercalated Games.‘ Tofalos won the “two arm lifting event” with a successful effort with 142.5 KG on his third attempt. 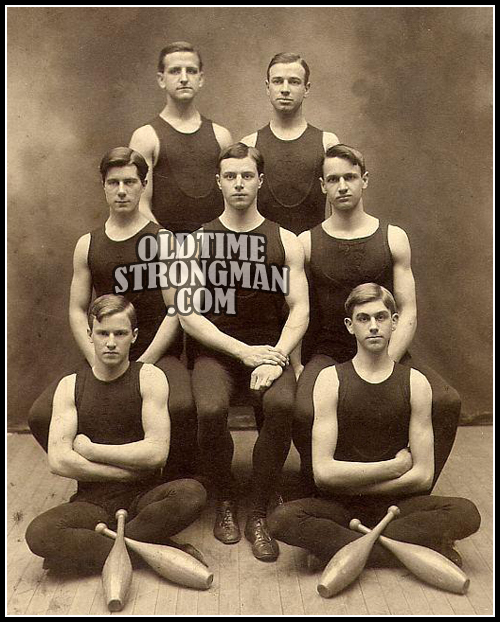 A rare look at the 1906 Rutgers University Gymnastics Team. Captain and horizontal bar and flying rings expert Thomas Devan (class of ’06) is sitting front and center.
On the lower left and right sits club swinging experts Frank Morrison (class of ’09) and Charles Thompson (class of ’08). Morrison won the collegiate club-swinging championship in 1908.

Rope Climbing was a contested event at several Olympic games. Here’s a rare shot of the event from the 1906 Athens Summer games which was a 10 meter climb for time, held on April 26, 1906 in the Panathenaic Stadium. Georgios Aliprantis of Greece took the Gold with a climb of 11.4 seconds. Béla Erődi of Hungary and Konstantinos Kozanitas of Greece both had identical climbs of 13.8 seconds but the Silver was awarded to Erődi since Kozanitas accidentally touched the pole from which the rope hung. Notice that these guys were playing for keeps, don’t see any padding underneath. With two countrymen finishing on the medal stand, the rope climbing event was very popular with the Athenian crowd.

Arvid Andersson was a Champion Swedish strongman who put up some very impressive numbers at the turn of the century. He got his start lifting horses in the circus and once he moves on to more conventional weights, quickly set the world record in the Clean & Jerk with a lift of 328 lbs on November 7th, 1906.

Professor Desbonnet, was the judge, and was highly impressed with the lift. Andersson’s nickname soon became “Starke Arvid” or Strong Arvid.
Like many strongmen of the time he was also a wrestler, and held the Swedish Heavyweight Championship for many years. After he retired from wrestling and lifting contests, “Starke Arvid” moved back to Stockholm and opened a café.

A rare look at the “two arm lift” event at the 1906 Olympics. Silver medal winner Josef Steinbach of Austria is shown here lifting while the eventual winner Demetrious Tofalos of Greece, looks on. Steinbach took gold in the single-arm lifting event later on. As a point of interest, the 1906 Olympics is now referred to as the “Intercalated Games.”