Another look at Bill Pettis and his 23-1/4-inch arms. Bill actually competed in a few bodybuilding contests in the early 70’s but typically finished toward the bottom of the pack — he certainly had the arms covered, but not much else. Note that Bill is also sporting a nifty Vince’s Gym tank top.

It was said that Clevio Massimo’s family was descended from great Roman athletes of antiquity. That certainly isn’t too difficult to believe, Tony was one of the most muscular men who ever lived and excelled at a number of great feats. He could support a piano and player in the Tomb of Hercules position, bend spikes and tear phone books. Massimo was also a great Hand Balancer and wrestler — he only weighed 190 pounds but you would never think it looking at his pictures.

A look at the cover of the November, 1972 issue of Muscular Development magazine featuring Larry Scott on the cover. They sure don’t make ’em like this any more, (neither the magazine or the man.) 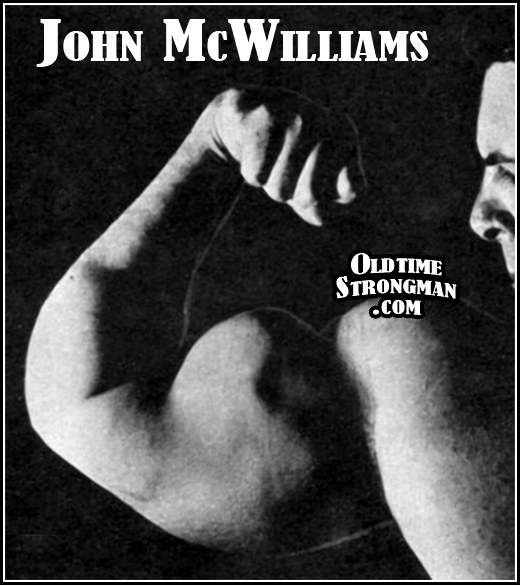 Some of the most impressive arms of all time belonged to Mr. John McWilliams. He happened to have a pretty good head start in the arms department thanks to Mother Nature, but what also helped McWilliams stretch the tape was a focus on basic exercises. That, and because he drank plenty of water… since muscle tissue is composed of mostly water, he believed that glugging down that H20 went directly to his arms! While this belief is a little simplistic, drinking enough water IS a good idea (most people don’t get enough and no doubt actually DID contribute to his impressive results.