From 1911 to 1934, Edward Aston held the title of ‘Britain’s Strongest Man’ and judging by this picture, it’s not hard to see why. One of Aston’s “Secrets” was to pay particular attention to strengthening the grip and forearm. He employed a number of different exercises to build his hand strength but one of his favorites was to do one-arm timed hangs from a climbing rope.

They used to call Charles Vansittart “The Man With The Iron Grip” for good reason — he could bend an Old English penny, rip a tennis ball in half and bend a spike like the one pictured above.

Bending bars, spikes and nails has always been a traditional Oldtime Strongman feat, not only do many people find it incredibly impressive but merely doing it will build tremendous strength throughout the entire body.

You can tell that rectangular stock (like the spike above) was actually hand bent by the shape. If a piece of steel was truly hand bent, it will bend on the angle, not the flat edge.

In case you might be wondering why the great French strongman Apollon was known as a true ‘King of Strength’ and could easily lift weights that others couldn’t even budge, here’s a pretty clear illustration. On the left, the forearm of an early professional wrestler named Wolff which measured 16-3/8ths inches in circumference. Apollon’s arm, on the right, measured over twenty inches around but even more impressive was his massive forearm which appears even bigger than Mr. Wolff’s upper arm.

Bruce Lee was described by many as a “forearm fanatic” which makes perfect sense when one is devoted to the martial science – stronger wrists and forearms translate to harder punches and better grappling. This style of gripper is a simple design and has been around for decades, well before Bruce Lee came along, yet many people still know and refer to it as “The Bruce Lee Grip Machine”

This particular piece was made for Bruce by his friend George Lee (no relation) and he used it often. We have our own version of this type of grip machine available from time to time. This device actually brings quite a bit to the table, most importantly in our opinion, is to be able to train the crushing movement in different ranges of motion, much like one could use a power rack to improve various exercises.

The Great Orlando was another excellent steel bending strongman from Florence, Italy. Unsurprisingly, a steady diet of long bar steel scrolling led to some big strong hands and a knotty pair of forearms.

Arthur Dandurand was yet another great Canadian Strongman.

It was said that he had a 16-inch forearm at a bodyweight of only 185 pounds and it certainly looks that way in this classic shot.

Dandurand was often called the “Canadian Sandow” and some of his best lifts were as follows:

In addition to these feats, Dandurand was very good at juggling and bent-pressing human weights. He also could shoulder a 406 Pound truck engine and at a contest in 1908, Dandurand pushed a wheelbarrow loaded to 4300 Pounds for a distance of 23 feet.

To say that the French Canadian Strongman Arthur Dandurand was gifted in the forearm department would be an understatement. He not only was able to deadlift over 550 pounds with one arm but also achieved a rectangular fix with 177½ pounds – an all-time record! Keep in mind that Dandurand only weighed about 180 pounds. 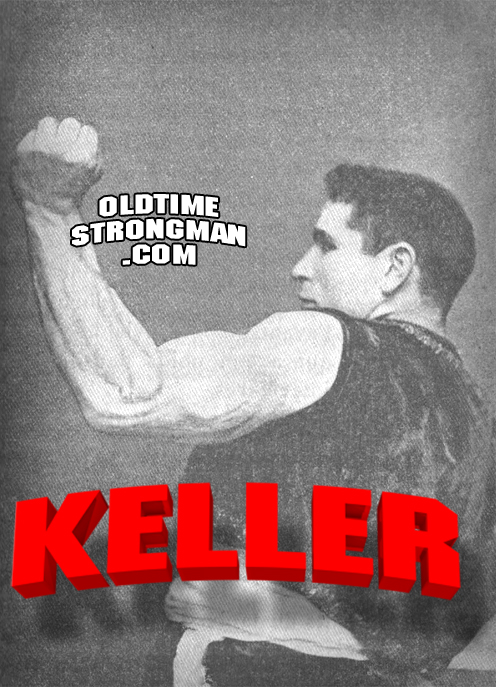 Jules Keller “The Upside Down Man” was a handbalancing star attraction in the early 1900’s. We have long said that the regular practice of handbalancing will build unusual strength and development in the forearms and this example is certainly case in point. Supporting the entire bodyweight on the wrists and using the fingertips to maintain balance trains the lower arm musculature in ways that no other method can match.

Keep in mind, Mr. Keller only weighed 150 pounds, has there ever been a more impressive display of the development of that muscle group? (even a hundred years later?)

Talk about “built for strength,” this rare image of the great Bruno Sammartino highlights his incredible bone structure. No wonder he toyed with 550+ lb bench presses and wiped the mat with pretty much everyone he ever faced in the ring… I sure wouldn’t want to be at the other end of THAT fist.

Grip training has always been a very good idea. Back in 1901, if you wanted to train your grip, one of your options was the W & H Grip machine, which is claimed to cure insomnia, writer’s cramp, nervous trembling and all manner of other physical ills. Be that as it may, the fellow pictured above does certainly have a rather stout forearm.