A look at the great Tommy Kono pressing 350 lbs. on May 26, 1961 – a World record. Tommy’s bodyweight was only 183 lbs. at the time but lifted in the 198 lb. class. When they weighed everything afterwards, they found the loaded bar actually weighed out at 350-1/2 lbs. This amazing lift took place at the Hawaiian State weightlifting championships and the Mr. and Miss Hawaiian Islands contest held at the Nuuanu YMCA Auditorium. The same day he snatched 290 lbs. and clean and jerked 350 for a 1000-1/2 lb. total.

At the 1908 World Weightlifting Championship, won by Josef Grafl, the second place winner was Eduard Danzer of old Vienna.

Here’s a rare shot of the Danish weightlifter Svend Olsen lifting in the light-heavyweight class at the 1932 Los Angeles Olympics. Svend finished with the Silver medal after posting a 360 kg total (102.5 kg Press, 107.5 kg Snatch, 150 kg. Clean and Jerk).

This lift appears to be Olsen’s third Snatch attempt of 112.5 kg (which was not passed.) Olsen briefly held two official and one unofficial world records but retired shortly afterwards to become a strongman at the Circus Meihe.

Once in a great while several different legends will be in the same place at the same time. In this case, a strength show at Bryant Hall in New York City circa 1922. From left to right George Jowett, Karl Moerke, Sig Klein and Mark H. Berry. (Klein made a record press at the show.)

The great Canadian lifter, Doug Hepburn is shown here in what probably could be called his signature pose. If the issues of Strength and Health on the wall are current, this picture dates to early 1947. — Although I suspect this was taken later than that. Don’t know if you realized this but growing up, Doug was of very average height and build.

At 17 years old, Doug was 5’8″ and weighed only 145 pounds. It was around that age that he discovered weight lifting… and the rest is history. To give you an idea of Doug’s immense power, his best 2-arm overhead barbell press was 335 pounds for 10 reps!

Shown here: Josef Matějček of Czechoslovakia, stalking the bar at the 1928 Amsterdam Olympic Games. Adding up the weight on the bar, this looks like his first press attempt. Matějček finished 11th in the lightweight class with a 265 kg total. 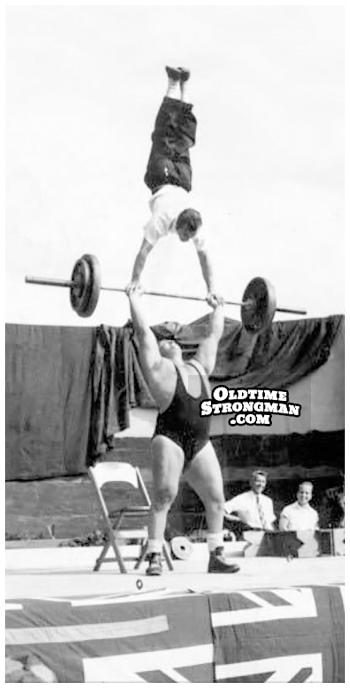 Hand Balancing was part of Doug Hepburn’s regular training program. He figured the the increased blood flow to the upper body while in the inverted position would be good for building his pressing strength. Given his track records, there certainly may be something to that. Here’s Doug as the ‘bottom man’ in a unique feat: that’s a 205 pound barbell and a 170 pound man he’s holding overhead. This picture is more impressive than it may appear when you consider how they got in that position in the first place – a feat in itself. This picture was taken just after Doug established a new world record in the press with a lift of 353 pounds.

Lifting Barrels and Kegs has long been a Oldtime strongman Tradition since it builds a unique kind of strength — especially is the barrel is only partially filled… If water (or beer) is sloshing around inside the barrel, it becomes a “live” weight, and a tremendous test of strength — and it takes a lot less weight than you think. A partially-filled barrel weighing as little as fifty pounds can give you a tremendous workout.

William Boone’s 1937 Training Program
by Brooks Kubik
William Boone was a tremendously powerful lifter in the 1930’s and 40’s. He first achieved fame when reports were published of his astonishing gains on a program of heavy, high-rep squats, which he was inspired to follow after reading about what a similar schedule did for his Herculean contemporary, Joseph Curtis Hise. If memory serves correctly, Boone gained something like 80-100 pounds on the squat program.

William Boone Training in his back yard

Boone eventually built up to a bent-press of close to 300 pounds … a deadlift of 700 or so … a partial dead lift of 900 pounds … and a jerk from the rack of 420 pounds, which certainly ranks him as one of the strongest men in the history of the world.

I believe that he made these lifts in the mid-to-late 40’s, or the very early 50’s. These achievements are all the more remarkable because Boone worked a very hard, hot, heavy job digging water wells in Louisiana and Texas.

According to Boone, one job digging wells on a ranch in Texas was so hot that the men had to drink 4 gallons of water per day just to keep from overheating under the scorching southwestern sun! …And yet, Boone often would work all day and THEN do his training!

Where did Boone train? In his backyard! He didn’t even have a garage or basement in which to train. He lifted huge weights standing on the grass or on a dirt surface.

Boone’s training was very unique. He always followed what I refer to as “abbreviated training programs.” A 1937 issue of Mark Berry’s little magazine, “Physical Training Notes,” contains a letter from Boone to Berry with the following update on Boone’s training.

The following information is from a period when Boone was building up to the really big lifts mentioned above:

I have been doing only three exercises, namely the Two Arm Press, Two Arm Curl, and the Deep Knee Bend…”

“Here is my last workout. I work only once a week on pressing and twice a week on squatting. Monday and Friday — D.K.B.’s (i.e. squats); Wednesday — pressing. My workouts average about an hour in length …”

“My arms measure better than 18 inches now and I have hopes of pressing 250 pounds ten times and 300 pounds once.”

John Terpak joined the York Barbell company in 1935 and from there did pretty much everything there was to do in the world of weight lifting. Terpak won eleven Senior National Weightlifting Titles (1936-1945 & 1947) and over his career he lifted in three different weight classes (148, 165 and 181.) His best performance occurred in winning the 1947 Worlds as a light-heavyweight:

Terpak also one-hand snatched 154 pounds and one-hand jerked 170-1/2 pounds in some early weightlifting contests when those lifts were still contested.

He was a three-time Olympic Team Member (1936, 1940, & 1948), a part of nine total Olympic teams and sixty consecutive National Championships as a lifter, judge or coach. He eventually served as an executive for the York Barbell Company.

Also you can also tell this was an early shot by that style of barbell plate. There is only one known set of these 30’s-era “deep dish/larger letter” York barbell plates still in existence.